this will be likely the fourth video about Corona that will be deleted on YouTube.
I want to summarize the most important information for you:

The corona virus is a show, there is no corona virus. It is a fictional
theaterto limit our civil rights.

Sooner or later the police or the army will be ordered to give us a vaccine
or to give us an RFID chip.

Our important task is to point this out to the police – today.

WE HAVE TO AWAKEN THEIR CONSCIENCE

We have to make sure that the police don’t attack us, but this person
who gives the insane order.

Write a letter to a cop or soldier you know.
You can also go to a police station or barracks near you to submit a letter.

The letter should not contain much information. Just a significant sentence
or just a picture. But this sentence will left an impression!

Imagine that your police colleague refuses to be vaccinated.
Your colleague is forced to do this. What would you do?

You are ordered to implant an RFID chip to your police colleagues.
But he refuses. What would you do?

We must act together, with the police and with the army against the NWO.
Let the police know what will happen to us.

The problem: The police get food and money from the NWO.
The police are dependent and will do almost anything the NWO tells them
to do.

The solution:
WE HAVE TO AWAKEN THEIR CONSCIENCE
The police have to refuse the order.
They must point the gun at the one who gives the insane command. 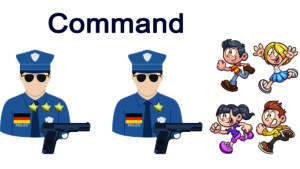 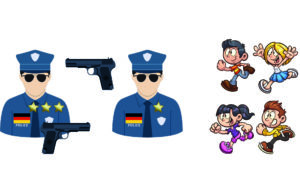 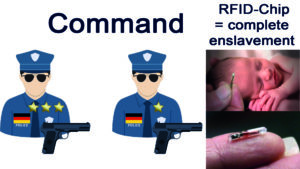 WE HAVE TO AWAKEN THE CONSCIENCE. 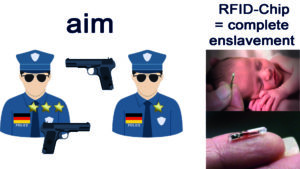